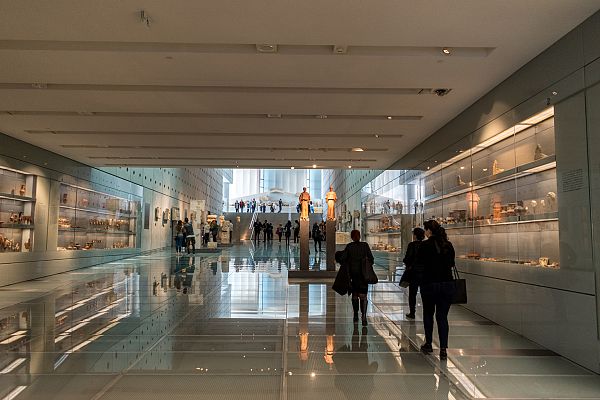 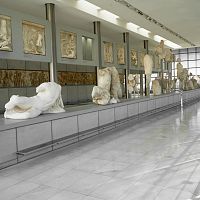 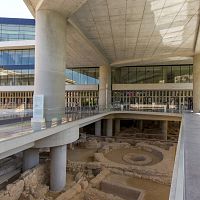 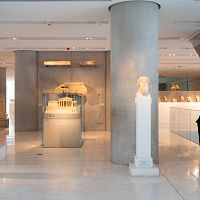 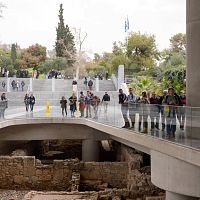 The Acropolis Museum is one of the best museums in the world, according to the British newspaper Sunday Times. It is dedicated to the Parthenon, the surrounding temples and local archaeological finds.

Most exciting Acropolis Museum Athens facts you should know

The Acropolis Museum in Athens will not leave anyone indifferent. Its project was built by the architect Panagis Kalkos. The establishment of the site took almost 10 years (from 1865 to 1874). The museum’s new quarter was built in 2003. In 2009, it was officially presented to public. Modern Acropolis Museum is a real treasure-house, preserving unique masterpieces. They are mostly represented by original works of the archaic and classical Greek art, having a direct relation to the holy site of the Acropolis of Athens.

This modern complex does not look as depressive as the museums in other cities and countries. It is a bright luminous architectural ensemble that seems to rise above Athens, providing the night city with a fairy-tale atmosphere. Sometimes, it feels like the building is soaring above the ground. Such an illusion results from the fact that the building stands on over a hundred columns. Thus, it serves as a dome for the archaeological excavations, held under it at present. And you will undoubtedly see them as they were not intentionally built for visitors.

Right under your feet, you can observe the authentic ruins of the old district, which was once flourishing and saturated with drainage systems, baths, and a unique mosaic. It sounds impresses, doesn’t it?

How about the name of the Acropolis Museum architect? The site has two authors. The interior and the exterior of the new Acropolis Museum building were built upon the design by the architect from New York, Bernard Tschumi. He worked on the project with another gifted designer of local origin, Michalis Fotiadis. Their plan was thought up to the last detail. While looking at the landmarks at a distance, travelers notice that the big panels made of glass perfectly fit into the atmosphere of the old and contemporary districts of the capital of Greece, turning a visit here into a memorable experience. The building covers the territory of 25.000 square meters. Its exhibitions occupy more than 14.000 square meters. But this characteristic is not the major feature of the museum.

Exhibitions and halls of the Acropolis Museum Athens Greece

The artifact collections are set within three levels. On the fourth layer, you can admire excavations.

The ”Slopes of the Acropolis” hall is situated on the ground floor. Here, you can observe the objects from the shrines, which were standing on the hills of the Acropolis. There are also many artifacts, depicting routine of the villagers, living at the foot of the hill at different historical periods. The “Hall of the Archaic Period,” sitting within the first floor, exhibits beautiful sculptures, which adorned the temples. Here, you can also see the gifts, brought by the pilgrims: statues of the horseback riders, the goddess Athena, men, marble bas-reliefs, miniature bronze and clay initiations.

The most fascinating hall is “Parthenon Hall.” It sits on the third level. It preserves a unique frieze here. It has a height of 12 meters. It is 160 meters long. It is a long description, depicted in a bas-relief, telling about the participants of the Great Panafenia (a celebration, held every four years in honor of the goddess Athena). It will sound surprising but, initially, only 50 meters of the bar-relief were brought into the building. The staff of the attraction and its restorers repaired lacking parts to convey the beauty and grandeur of the composition. While admiring this masterpiece, it is advisable to take a deeper look at the West Frieze, depicting the “Parthenon Riders.” The facts and the history say the famous Fidius had made his impact on the creation of the relic.

Among the treasures the landmark preserves:

The collections are placed within four levels. The fifth level comprises a wardrobe, a restaurant, a café, and shops. The Acropolis Museum gift shop provides a diverse choice of souvenirs. Here, you can buy copies of the exhibit objects, unusual jewelry, and office accessories. On the second storey, there is a bookshop and a reading room. In the northern part of the building, you can find a room for parents, provided with the necessary facilities to take care of infants and young children.

The Acropolis Museum sits near the  Acropoli station of the metro and in 1 kilometer from the central Constitution Square. To get there from Athens city center, you can take a walk, following the road signs, or a catch a taxi.